There are two things you should do to tell whether a casualty is experiencing shortness of breath, also known as dyspnea: Ask and Observe.

Once you have an idea that the person may be experiencing troubled breathing, start observing the condition. The only way to treat shortness of breath is to provide the victim with more air or oxygen because shortness is breath is either caused by lack of oxygen in the air or an obstruction in the airflow. Whatever the reason, the best treatment is to counteract the condition by providing the body with more air to meet its oxygen demands. 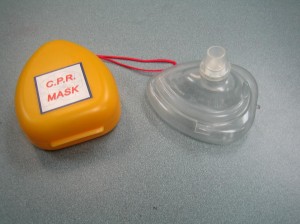 In extreme cases trained rescuers and responders will use CPR pocket masks to assist victims with breathing emergencies.

You will notice that the casualty will look as if he has just ran a marathon, with the following symptoms:

When to seek medical help

In case of a severe condition regarding shortness of breath, it is ideal to call 911 or a local emergency number immediately. Shortness of breath may be an underlying cause or a symptom of another condition such as an anaphylactic attack, a heart attack, stroke, heat exhaustion etc. Severe symptoms and signs of breathlessness include:

The casualty will not be able to control his breathing to speak out the words he intends to say.

If shortness of breath is a symptom of another condition, it will be accompanied with weakness. Lack of oxygen in the body results in inadequate muscle strength to move joints and limbs. A weak, breathless casualty will be unable to keep his head upright. A victim of shortness of breath will in fact, sit straight and upright with his hands on his knees to encourage chest expansion and oxygen intake. Therefore, the muscles are more engaged in chest expansion and ventilation, rather than joint movements and body position.

A lack of oxygen in the blood supply to the brain can cause a person to become delirious and confused.  This is a very lethal sign indicating that the brain is suffering from oxygen starvation. Remember that brain cells cannot reproduce or be replaced. Oxygen starvation can result in death of the brain cells and a prolonged exposure to insufficient oxygen may also result in brain damage and death. Therefore, victims require immediate medical attention and should be taken to the emergency room promptly. The victim may require rescue breaths till help arrives—if he is unconscious.

To learn more and to receive hands on certification and training enrol in workplace approved first aid classes. Candidates enrolled in these programs will receive certification and learn to recognize and manage a variety of breathing emergencies.

View all posts by vanfirstaid →

One Response to “Shortness of breath: Symptoms”