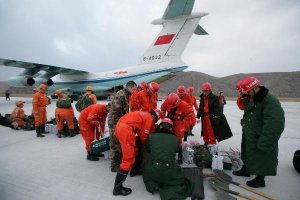 of a disaster situation to a health care facility. Such protocols will vary between each medical institution depending on the perceived and actual risks of the community experiencing an emergency disaster event. Generally, the notification to the facility will come from outside sources unless the initial incident occurred within the facility itself.

The emergency operations plan should clearly state how the disaster management is going to be initiated and who are the people or committee involved during the duration of its activation. If communication is effective and well coordinated, the field incident command will give immediate notice of the approximate number of arriving injured victims with the exception of estimated number of self-referring victims who will arrive by unnoticed.

Patient tracking is also one of the most important components of an effective emergency operations plan specifically in casualty management. Disaster tags, which are numbered and to be included in triage priority, name, age, address, treatment or medications given are very vital in proper identification and continuity of care. These types of identification paraphernalia should  be securely placed on the patient or injured victim at all times for proper identification and ease in documentation as well as proper endorsement between shifting medical personnel. Ideally, the tag number and the patient’s name are used by the command center to better track patients, assigned bunks/beds and provide their families and significant others the information regarding the patient’s/victim’s condition.

Each facility must have in its emergency operations plan a determined supply list based on its own perceived and actual needs assessment. St Mark James has developed a universal and basic survival/shelter resource kit that is very useful in the event of a medical emergency. The emergency operations plan committee should devise a feasible and realistic plan especially in the preparation of the top ten most vital medications and emergency medical equipment used during the normal day-to-day operations and then anticipate which other supplies and medications must be taken with cognizance in a disaster emergency involving mass injured victims and casualties.

For example, the health care facility might include a plan to have an available stockpile of antidotes (for known biological and chemical agents that can be used as a weapon of mass destruction) and/or antibiotics used in treating widespread epidemics. Furthermore, information should be made available and accessible regarding stockpiling and restocking any of the basic and special supplies as well as taking the initiative in making sure timely replacement of used supplies are delivered on time.

Communication is the key and a vital component of a disaster management contingency. Communication within the vast and intricate system of hierarchy and inter-agency dominated environment concerning disaster responders and interconnecting units of the government and the health sector is paramount to the success of the plan of action. More importantly, effective, informative communication with the local and international media as well as the concerned families of the victims is very important because the scale of such disasters, the kind of emergency operations plans initiated must not only be concerned with the general welfare of the concerned people within health system but should involve the larger community so as future disasters can be effectively controlled.