It is a known fact that children are naturally curious and often wonder how things work. In most cases, they show this curiosity by asking questions or exploring the world around them. One of the possible dangers of the curiosity of children is when they place foreign objects into their mouth, ears and nose. This can be choking hazard and can put children at risk for injuries and infections.

A foreign body in the nose simply means that an object is placed in the nose that is not supposed to be there. Children below the age of 5 often face this issue, even though it is not uncommon for older children to put foreign objects in their nostrils.

Common items that are considered as foreign objects in the nose

A foreign object in the nose is usually place by the child, another child or by accident in some other way. The common items that children put into their noses include:

In most cases, children oftentimes put these objects into their nose out of curiosity or they are simply mimicking other children. Nevertheless, foreign objects can also go into the nose when a child is sleeping or when he/she attempts to smell an object.

Signs of a foreign body in the nose

One clear way to tell that a child has placed something in his/her nose is that you can actually see the object present in the nostril. The child might also suffer from runny nose or have difficulty breathing.

Another common sign of a foreign object in the nose is nasal drainage on the affected nostril. The fluid that drains from this nostril can be clear or grey in color. In some cases, it might have a bad odor which usually indicates an infection. 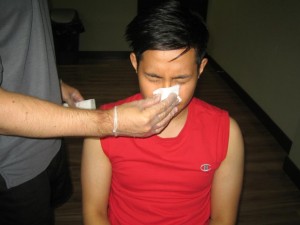 Foreign body in the nose

How a foreign object in the nose diagnosed

In most cases, you can see the object once you inspect the nose. Nevertheless, some objects are too small to be seen clearly, thus a doctor should be the one to check it out. The doctor will ask the child to lie back while inspecting the nose using a hand-held lighted instrument.

In case the child has a runny nose, the doctor will swab some of the fluid with a cotton swab and it will be tested for the presence of bacteria.

Removing the foreign object in the nose

It is important to remove the foreign object in the nose. In some cases, simply blowing the nose will do. If this method will not work, the object can be removed by using tweezers. Just make sure that the object is large enough. If it is too small, avoid using tweezers since it will only push the object deeper into the nose.

If the object could not be removed by using tweezers, go to the nearest hospital or doctor’s office.